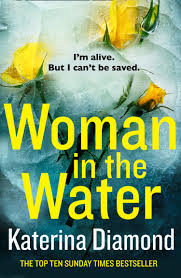 Detectives Adrian Miles and Imogen Grey are now in a relationship, though that’s not common knowledge at work. However, on this case things come too close to home and it has serious repercussions for both.

On his way into work Miles stops as some women think their children saw a body in the water. Upon investigation, it is a woman…and she’s alive. Someone wanted her dead, but there’s no signs of robbery or sexual assault. It becomes a matter of some urgency to work out what on earth happened when the beaten body of a young man is also found nearby.

Before we know it we’ve been pulled into a very dark place. This isn’t a ‘whodunnit’, but a trying to pull it together to prove they did it kind of story.
We focus on Angela Corrigan, the much younger wife of local businessman Reece. Nobody will speak out against him, and though we’ve strong reason to believe he’s been up to all sorts of things nobody will talk, and there’s no evidence.

It’s testimony to the bullishness of these two Detectives that we get anywhere. However, it comes at awful personal expense.

Adrian Miles suffers in the course of this investigation in a way that you cannot begin to imagine. It’s brutal, totally demeaning and the disgust I felt as we learn the extent of the wrongdoings against not just him but so many others was upsetting.

While it was a dark story that was not, in any way, enjoyable to read, I am intrigued at the potential for where this might go next.

Thanks to Diamond and NetGalley for allowing me to read this in exchange for my honest thoughts, prior to its publication in November 2019.