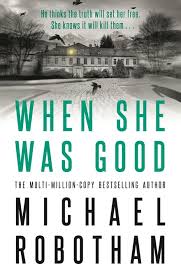 Call it an oversight on my part, but I have to confess to not having read the first book in this series. While I do think it might have helped me understand better the dynamics between our two main characters, there was enough here for this book to stand alone (and I’m hoping when I go back and read the first book it will offer a different perspective on some events).

The story focuses on psychologist Cyrus Haven who has his own demons, but this time it’s about a young girl – Angel Face, or Evie Cameron as he has come to know her – and Cyrus’s attempts to help her remain hidden when people from her past come looking for her. Through Evie’s memories and Cyrus’s investigations we learn a little more detail about what led to Evie being found at the age of ten in an abandoned house with the dead body of a petty criminal who had been tortured. Nobody is meant to know who the young girl found at this infamous crime scene is, but Cyrus does and through his work someone has come to make the connection.

It’s not giving anything away to say that Evie’s past is closely linked to some very important people and a suspected paedophile ring. We suspect a number of those who Cyrus comes into contact with, but we do eventually get some answers – even if not everything is tied up cleanly.

There are some unpalatable details, and hints of a darkness that is quite unimaginable. Given that a lot of detail is told through Evie’s memories/her perspective we are not given too much (which I’m pretty grateful for), though what we are told is enough to sicken and make the reader root firmly for Cyrus and those trying to put an end to such horrors.

Thanks to NetGalley for allowing me to read this prior to publication, and I’m looking forward to digging out book one and seeing how it began.