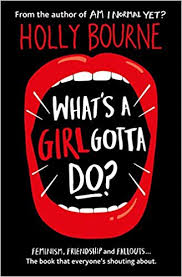 The third in The Spinster Club series so you know what to expect…and Bourne doesn’t disappoint.
The word ‘feminism’ has, too often, come to seem like an insult. Even with the things that have changed since this book was published, some of the attitudes explored within are deeply ingrained. What is wrong with wanting to call out people if their attitudes/views challenge the way we think about gender?
The book focuses on Lottie, still determined to get her place in Cambridge and still more than a little intimidating. When she is sexually harassed on her way to college it sparks a new project. Fed up with the little things – and when we read them it’s terrifying just how common some of these still are – Lottie decides to spend a month calling out examples of sexism.
It’s a project that garners support and vitriol in equal measure. It highlights how awful people can be, but it also asks us to examine just how far we’ll be pushed before we decide to make a stand for what we think is right.
This series deserves to be pushed into the hands of all. It might do nothing more than get people talking. But you have to start somewhere…
Skip to toolbar