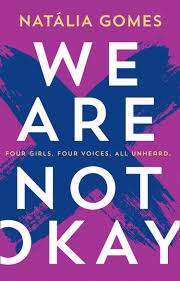 This story by Nataliá Gomes is of the moment, and it certainly delivers a clear message to teen readers.

We focus on four teenage girls: Lucy, Ulana, Trina and Sophia. Though they are all the same age, they have very different experiences and lives. However, each has a secret that they want nobody to know about, and they’ll do anything to ensure it stays secret.

Of the four girls I felt a lot of sympathy for Trina. She has a lot of people talking about her, and ends up in a situation over which she has no control. As a result she makes some difficult decisions which have pretty extreme consequences. Ulana faced a very real fear, but a lot of it seemed to be about her doubting herself and her family. Ultimately, things worked out okay (or at least looked as if they would). Sophia gets caught up in something that, increasingly, seems to be felt to be a normalised experience – and we see her just how damaging it can be. Lucy was the character I found it hardest to empathise with because so much of her story revolved around situations she had instigated. You don’t wish harm on anyone, and the way the others interacted with her did give a positive message eventually.

There was a lot happening here. It seemed as if most topical scenarios were explored here, and not all were given quite as much detail/exploration as they might have been. I felt one such incident (concerning Sophie) seemed to come out of nowhere and I had to reread a section wondering if I’d missed something.

Ultimately this was a book that made me very very relieved to not be a teenager of the social media generation, and determined to try to encourage people of this age to be as open as possible about their experiences. Everyone plays their part in this bullying culture, and the sooner we take responsibility for it the better.

Thanks to NetGalley and HQ Young Adult for allowing me access to this prior to publication.