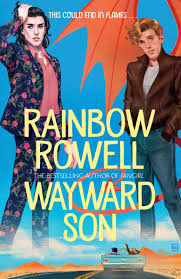 For fans of ‘Carry On’, this is long over-due.

Baz and Simon still don’t seem to have things sorted. Now they’re not needing to save the world, it’s a bit harder to work out your feelings.

One thing we know for certain is that Simon is depressed. So, his best friend decides a road trip through America will be the perfect thing.

As you’d expect, nothing quite goes to plan. We watch somewhat taken aback as one awful event after another befalls the group. From Micah dumping the girl who’s travelled to the US to see him, to being attacked by vampires, before taking on a group who are determined to change the way we see the world, you’re never quite sure what is going to be thrown at this group next. But it’s okay, because Baz can let his vampire self out, and Simon has wings!

This was a rather crazy scenario. It hinted at further potential for problems but had so many comic moments that I couldn’t help but laugh out loud.