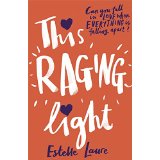 Laure’s debut was due for publication in January 2016, and I was lucky enough to be sent an ARC from NetGalley in exchange for an honest review.

Touted as a writer for fans of Rainbow Rowell and John Green, Laure is always going to have a lot to live up to but I do think the signs are good, even though they don’t quite work fully here.

‘This Raging Light’ tells us the story of seventeen-year-old Lucille. Her father is known as the guy that attacked his wife. This would be a tough enough situation to live with, but Lucille’s mother then leaves. Lucille is suddenly left with no adult figure to rely on, and with sole responsibility for her nine-year-old sister, Wren.

I think this would be an impossible situation for most teenagers to cope with, but Lucille is determined to not give in gracefully. She vows to do whatever she can to stop people learning the truth of her situation, and to protect her younger sister.

Most of the novel focuses on Lucille’s attempts to live as much of a normal life as she can. She’s a wonderful character and I liked the fact that this story didn’t veer into over-sentimentality. Unfortunately, life is never straightforward and Lucille also has to cope with getting a crush on her best friend’s brother, who has a girlfriend.

On occasion some of the characters’ reactions were rather unlikely, and I’m not totally convinced that Lucille would have got quite the response from her neighbours that she did. That aside, it was a thought-provoking read that I think hints at good things to come.