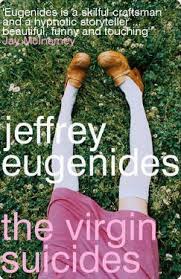 The Virgin Suicides was one of those reads that had me fully engaged throughout, though now I’ve finished it I feel none the wiser about what I’ve read.

My first impression stems from the fact that the narrator is very hard to fathom. At times one voice; at others, a voice speaking as representative of many. It’s evident that the narrator is a male, someone on the periphery of these events and watching in fascination as the story unfolds – even involved to a small degree – but never really coming to any awareness of the story they are watching.

Our narrator, like so many of those around him, is obsessed with the Lisbon family. We begin with the story of Cecilia, the youngest sister, who after a failed attempt to kill herself leaves a rather macabre party and throws herself onto their fence. We don’t know why, and we get very little sense of how this event impacts those left behind.

Following the narrator through their recollections of the neighbourhood memories of the family meant I always felt quite detached from the events described. The description of the decline in the family home and their personal appearance, as well as the behaviours exhibited, all indicate extreme reactions to a traumatic event. I felt saddened that a family in such turmoil were, effectively, abandoned as nobody knew how to break through the barriers they’d imposed on themselves.

It came as little surprise to see the gradual unfolding of the lives of the remaining family members. There was a grim resignation to this, but it all felt avoidable.
While this confused me and has left me rather uncomfortable, I am curious to read more by this author.