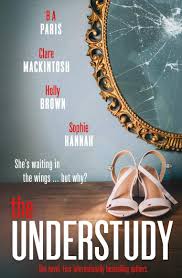 On paper this sounds like an idea that might work…four very different writers (all very good at what they do) each take a section of story and work it into a whole novel.

Our story focuses on a group of girls at the Orla Flynn Academy, a stage school where there are some definite divas…and not just among the students. A fairly tight-knit group of four friends. We’re given some backstory about one of them bullying another last year, but things are better. At least, until odd things start to happen to the girl who should have been expelled for bullying. Coinciding with this is the Head’s attempt to smooth things over, the arrival of a new student who might act as the gel the group needs to bond them.

From the outset we’re never quite sure of the truth. We get shifting views from the mothers, and as the weird events get progressively more dangerous we can see there’s something we’re not being told.

Though the style of telling worked well (with each chapter adding something else to the mix) the book just fell a little flat for me at times. The characters were all fairly unlikeable, and I didn’t feel we had enough invested in any of them to really care one way or another what happened.