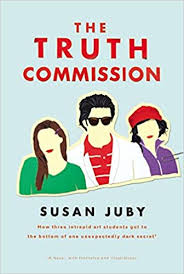 Quirky is definitely the best word I can use about this.

Normandy Pale is our narrator, and she is the younger sister of a celebrated graphic novelist. Her whole life has been laid bare in print, and Normandy doesn’t challenge this.

We meet Normandy as she’s starting a creative project – a piece of non-fiction exploring the outcomes of something she and her best friends set up. Finding out truths starts small, but very quickly Normandy is having to deal with truths that were previously hidden.

The style (with its endless footnotes) could have been irritating, but I found Normandy’s attempts to make sense of the things she learns quite entertaining. I liked her friendship group and the way they interacted.

Ultimately, I was quite appalled by her family. Her sister was, to put it bluntly, unscrupulous and her parents were bordering on negligent in their handling of this scenario. Part of me wants to say I was surprised by this, but I’m also wondering how much was set-up for an artistic attempt to manipulate the truth.