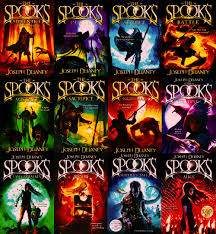 I came late to this party, and it took an element of persuasion to convince me to start this series.

The Spooks Series tells the story of the seventh son of the seventh son, Thomas, who becomes apprentice to a Spook. Through these books we learn what the job of a Spook entails, have a richly imagined world full of truly terrifying characters and also get caught up in the age-old battle between good and evil.

There is a part of me that regrets not reading these books as they were published – trying to read them as one series meant, at times, that it felt a little repetitive. However, I feel this is a minor gripe and certainly not a concern that seems to be shared by the many teenage readers I’ve recommended this series to.

There are many things I loved about this series. Not least the evident love Delaney feels for some of the more unsavoury characters – Grimalkin and Alice – and his steadfast refusal to play safe with vocabulary and ‘dumb down’ to get his readers. Yes, there’s a formula, but it’s one that works.

I’m already looking forward the the new series, though I hope there’s not so many in this one!