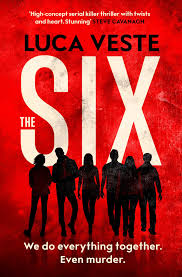 A serial-killer story with a difference.

Growing up often means leaving childish dreams behind. When Matt and his friends head to a festival for one last weekend of fun before settling down, nobody could know just how these events would change them. When Stuart is attacked in the night, the group pitch in to help him. They end up killing a man. Who knows why they do what they do next, but they bury the body and vow never to tell anyone.

Unfortunately, their kill wasn’t the only one that night. As they leave the woods, they find another body. This one seems to have been killed by someone who knew what they were doing.

One year on we can see the guilt is affecting them. Their friendship has been altered and yet they seem to have got away with murder.

Then comes the twist.

A series of unlikely events is set in motion with the apparent suicide of Stuart. Those left behind are now convinced that someone must have seen them and wants revenge.

What follows defies belief. However, I was turning the pages quickly, desperate to watch the strands pull together. I was surprised by the reality of the situation, but there’s still something of a twist at the end.