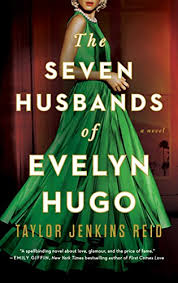 I’d heard lots about this book over the last few months, and the fictional Evelyn Hugo seems to have created quite a stir. The premise certainly made me curious – I couldn’t imagine what would possess someone to marry seven times – but I was reluctant to start this in case I didn’t feel quite the same way.
From the outset we are spun a story about the woman the world knows as Evelyn Hugo. We learn that her daughter has died and she is going to auction some of her well-known dresses to raise money for cancer charities. For reasons that we are not permitted to know until much later on, reclusive Evelyn agrees to an interview – but she insists on a relatively inexperienced journalist called Monique being the one she’ll talk to.
Though Evelyn holds the cards here, we follow Monique as she meets with Evelyn and prepares to interview her. Upon their first meeting we are told that Evelyn wants Monique to write her biography. We know there’ll be a reason for this, but we don’t get told what it is until we’re truly invested in the situation.
I was intrigued by the press excerpts from the time as they showed the reality of the world Evelyn was part of. We are given Evelyn’s frank account of her relationships and her determination to rise to the top of her profession. We follow Evelyn through her marriages to her co-stars, a well-known singer, a director and her best friend amongst others. We see the price she was prepared to pay for her fame and her feeling of wanting to achieve what she felt she should. What we are told fairly early on is how she sacrifices so much for her true love, the one she has never spoken of until now.
While Evelyn herself was not always the most likeable of characters, she was presented in a way that elicited sympathy. Sometimes she made terrible decisions, but she often made these decisions from a desire to do right by those she loved. I felt quite angry for her and Harry, and so many other characters, that they could not be honest about themselves because of attitudes in the world they inhabited.
Monique was a character that I couldn’t quite fathom. Her interactions with Evelyn allowed us to slowly learn about her life, and the time devoted to her background and situation certainly had me thinking she would be more integral to the story than she initially seemed to be. By the time we have revealed the exact link I was imagining all sorts. The revelation certainly justified Monique’s somewhat ambivalent attitude to Evelyn, and it made sense of her actions towards the end.
Skip to toolbar