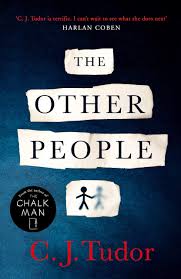 Thank you C.J. Tudor for yet another compulsive read. It has left me rather chilled, but once I started this I was desperate to know how everything fitted together.

Our story begins with Gabe travelling home, worried he’ll be late. He sees a rusty car being driven erratically in front of him. In the rear window he sees a young girl…his daughter Izzy…but then he loses sight of the car. Calling home he’s met with the awful news that his wife and daughter have been murdered. So, who was in the car?

The next time we see Gabe is years later. He’s taken to driving up and down the motorway looking for clues as to the whereabouts of his daughter. He is no longer a person of interest, but nobody has any clues as to what might have happened.

Without giving too much away, we are then shown a number of incidents that seemingly have no connection. We see Fran and her daughter, Alice, on the run. We have service station worker Katie struggling to make ends meet after the death of her father. We have the discovery of a car in a pond, with a body inside. And we have a number of references to a young girl asleep, a beach and pebbles…and references to The Other People.

What then follows is a twisting turning read, with just enough hints to have us start making links. There’s mystery aplenty and a borderline menace that had the hairs on the back of my neck tingling.

Once I finally reached the end I felt wrung out. So many secrets; so much sadness. Throughout, there was a sense of good people making bad choices…but I guess how we act in those trying times is what defines us. I just pray that I’ll never be in that kind of situation!