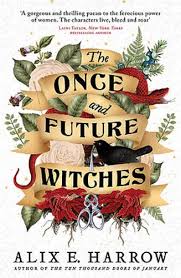 Once upon a time there were three sisters. They shared a bond like no other, but their father was wicked and turned them against one another. The elder sisters left, each feeling they had been wronged, leaving the younger alone with their father until she could take no more of his dominance. She runs, and finds her way to a new town.

The three Eastwood sisters – James juniper, Agnes Araminta and Beatrice Belladonna –  reunite very early on. They are very different characters, but they are united in their determination to have a world where they can be in control of their destiny. They want everything they are denied on account of their gender. So, how do they propose to get it? Through witchcraft.

This story explores attitudes to female emancipation and developing gender roles, mixed in with a fascinating account of practising witchcraft and magic.

Nobody in this is quite what they seem. Some of the elements of the book are fantastical to say the least, but I loved the three sisters and their respective struggles to live the life they choose.