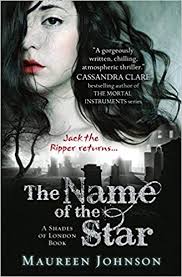 The Name of the Star is a light-hearted historical-based story. We focus on American teen Rory who moves from the US to study in the UK.

Her arrival coincides with a series of gruesome murders inspired by Jack the Ripper. Bodies are turning up on the sites of the Ripper murders, with similar names to the Ripper victims and they’re killed in the same way. Fear spreads through the town where Rory has come to study.

Initially I thought this would be a straightforward thriller,but then we learn of something unusual.

Rory appears to have seen someone that nobody else could. She is then followed by a team of extra-special police that few know about. They see ghosts – and their paranormal ability will be important in solving this mystery.

While the Ripper murders form the backdrop to the story, the real focus is the ability that Rory and the team share. Fraught with danger, and there’s real. Risk to the characters, but I loved the way the ending hints at what’s to come in book two.