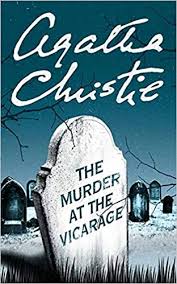 I’ve read very few novels by Agatha Christie, but I have clear memories of Miss Marple being shown on tv when I was younger. First impressions do count…and I’d always had this vague recollection of her being a rather prim and interfering elderly woman.

My overwhelming response after reading this was that Miss Marple as she appears here was the germ of an idea, but she’s not fully formed. In fact, we see very little of her – just an appearance at key moments. She is presented as shrewd yet on the ‘busybody’ side – always hovering and overhearing/seeing things she perhaps doesn’t need to.

In this first of the Marple series we focus on the murder of Colonel Protheroe, the kind of man many could find reason to kill. He’s found shot in the Vicarage and we follow the vicar and various villagers around as they try to establish the truth.

There’s the usual red herrings thrown in, and what was proven here was that sometimes the obvious solutions are the truth. People are, at heart, quite predictable and observation counts for an awful lot.