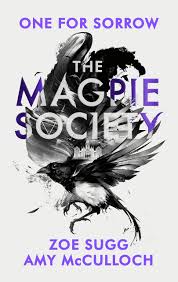 One for Sorrow is the first in a series set in an exclusive boarding school, where secrets are kept and nobody can be sure who to trust.

At Illumen Hall students are used to behaving in a certain way, and making the most of the privileges they are afforded. New girl Audrey is harbouring her own reasons for moving from America to attend the school, but she’s in no hurry to share her secrets. She’s required to share a room with one of the students who seems to be on the inside, Ivy.

The summer before our story starts one of the students is found dead. People suspect there’s more to the story, though the police claim the death of Lola was an accident. Someone is determined to push this, and a podcast is set up aiming to investigate the crime. A clear aura of mistrust springs up, and of course Audrey and Ivy end up teaming up to try and get some answers about what’s going on.

As the investigation continued, elements of the story were a little rushed. Some definite suspicious elements got overlooked because it didn’t suit the narrative the students were wanting to put forward. One or two elements were clearly on the way, and then not developed in any way to show why they’d been set up.
By the end we had some clues, but not a lot of answers as to what happened. Everything hinges on the mysterious Magpie Society…and I’m pretty sure the next book will start to look more at Clover and her significance.

Thanks to NetGalley for granting me access to this prior to publication.