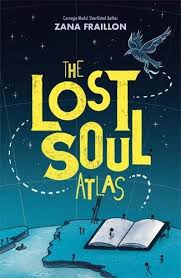 Thanks to NetGalley for providing me with a copy of this in advance of publication.

We know little about Twig, but when he wakes up at the start of the book we’re told he is in the Afterlife. He is in a world like nothing he’s ever seen before, and his guide through is a raven called Kurrk! who gets more than a little frustrated at Twig’s refusal to follow the rules expected of him. With just an atlas and an assortment of other objects, Twig determines to find his way to the other side and to avoid the guardians looking for him.

During his journey we learn a little more about Twig and his life on the streets. We’re never entirely sure what happened to his Da, and whether the creature he calls the Hoblin is really his gangland grandmother or a made-up thing. We find out a little about his life on the streets and how – along with petty thief Flea – he is forced to steal to survive.

While Twig’s life is not one you would aspire to, he has a bond with those he lives with that is to be envied. Fraillon uses these characters to highlight some of the injustices in the modern world, while the magical elements keep it from being too bleak.