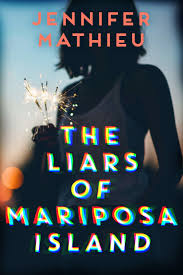 A very different book from Jennifer Mathieu, but I’m grateful to NetGalley for giving me the opportunity to read this prior to publication (scheduled for September 2019).

The ARC I received has the simple title ‘The Liars’ and this definitely indicates more characters could be given this title than the family of three we predominantly focus on.

The majority of the story focuses on 17 year old Elena, and her desperate attempts to force a life for herself in spite of her mother’s controlling behaviour. Her older brother, Jouqain, is allowed to work and go out at night but he recognises their mother’s behaviour is abusive. With nobody else to support him though, Jouqain doesn’t know what to do to improve their situation, although he does what he can to improve the situation for Elena.

Alongside the story of these two and the summer that starts to signal change, we get the background to their mother’s life. It is jarring at first, but the details about her wealthy home in Cuba and the change in lifestyle when she’s sent alone to America do explain – at least in part – some of her actions.

Nothing is really resolved by the end of the book for Elena, but the circumstances around Jouqain do give some hope that things might change in time.