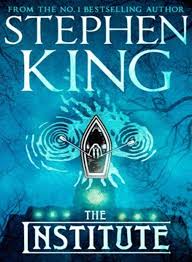 I’ve always had a mixed response to the Stephen King books I’ve read. The sense of horror and unease always creeps me out, and yet there’s usually a point in the book where things cross into implausible or are exaggerated to the degree that I find it irritating. There’s so much about his writing that sucks you in, but I always have a moment where something jars and it doesn’t quite seem to work. With The Institute this didn’t quite happen.

Our main character is Luke, an exceptionally talented kid who, at twelve, is being touted to attend two colleges. Unfortunately, before this can happen Luke’s parents are killed, he is drugged and taken across country to The Institute. What we then experience through Luke is an experiment of unimaginable horror.
Perhaps because this is told through Luke’s perspective, there’s a lot about The Institute that we don’t get told. There are hints of some of the things taking place, but even the small glimpses we did get were enough to have me scared. The group of teens/kids that are at this place though were all fascinating. The suggestion of what was being undertaken there was just plausible enough to have you wondering ‘what if’. It also raised some very interesting questions about the extent to which the mind could be manipulated.

While I can’t help but feel the whole thing was quite unlikely, my heart was definitely rooting for Luke as he undertook his dangerous game. As things drew together, Tim’s role became clearer. As things drew to a close the action was ramped up, and yet it didn’t seem off-putting. The final hints of a much bigger picture suggest King is happy for us to fear establishment and question the extent to which we are controlled. It certainly wasn’t neatly packed-up but it was enough.