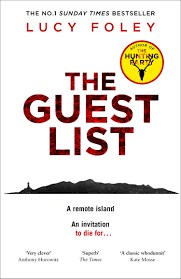 Will Slater, TV star of a survival show, is due to marry Jules Keegan on a remote Irish island. The two look perfect together, and Jules is – with the help of her sister, best friend and the wedding planner – determined to make this day special.

We start by being introduced to the dramatic moment when a body is discovered on the night of the wedding. We’re not told who, and I assumed it would be a fairly straight-forward ‘whodunnit’.

Immediately after this dramatic announcement we are introduced to some of the key characters of the story. As we learn a little more about each character we realise that many of them are harbouring secrets, and we do realise that a number of characters have good reason to want Will dead.

As the story progresses it was fascinating to see the menace such an isolated setting could generate. The cast of characters were flawed in many ways, and yet it was not until quite late on that we actually got answers as to how certain stories and events linked.

While the story was told in a way that kept you guessing I can’t help but feel that the ending all got wrapped up just a little too quickly.