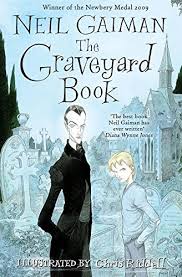 The Graveyard Book opens by plunging us into the horror surrounding a young toddler. His family are murdered by a sinister man known only as Jack, but he is saved by his curiosity because earlier in the night he escaped his cot and made his way outside and to the graveyard at the top of the hill near his house. Marked from the very start as a rather unusual character, our young toddler is saved by the Owenses…who just happen to be dead.

From his unlikely beginning our young toddler – Nobody Owens – is granted the right to live in the graveyard and to learn their ways. He is very much alive, but is given these magical skills to enable him to escape detection. His guardian, Silas, protects him and ensures someone is always available to look after him.

We watch Bod grow. He makes a tentative friendship, examines the world around him and is privy to many of the mysteries surrounding the dead. His curiosity develops as he learns about the world around him – and all too soon he shows a dangerous (yet very understandable) desire to learn how to navigate the land of the living.

Going to school causes problems. Bod can’t help but draw attention to himself, and so we watch the noose tighten as those who started by trying to kill him return and attempt to finish their task.

There was a wistful tone to this as we know Bod has to live his life, but his life with the dead was so positive it felt awful that he had to make this step.