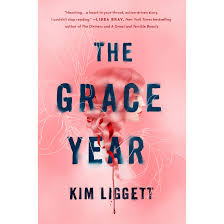 ‘The things we do to girls. Whether we put them on pedestals only to tear them down, or use them for parts and holes, we’re all complicit in this. But everything touches everything else, and I have to believe that some good will come out of all this destruction. The men will never end the grace year. But maybe we can.’

At its heart, the above excerpt sums up the message of this book for me.

A brutal story, chilling in its execution, but utterly compelling. A must-read, and I’m so thankful to NetGalley for allowing me to read this prior to its expected September publication.

From an early age girls in this dystopian world know that they are feared. It’s a commonly-held belief that they have the power to turn men mad with desire and to manipulate other women, driving them mad with jealousy. As a result, upon reaching sixteen the girls are forced to live apart from their community for a year in an attempt to rid themselves of their powerful magic, and prepare them to return and take up their places in the community.

We follow Tierney and her fellows Graces as they make their journey to the encampment. It’s a journey fraught with danger, but sometimes the greatest danger comes from within.

Watching the girls settle into their lives there was a sense of optimism. Under Tierney’s guidance, people started to make plans for the future and to prepare for the changing seasons. Unfortunately, not everyone is happy with this scenario and things start to go badly wrong.

The harrowing account of the girls’ camp experience was akin to Lord of the Flies. Nothing more brutal than a girl scorned, and the desire the girls show to punish one another was discomforting. This is not a read you want to ignore, but there are so many moments I wanted to weep at the senseless cruelty that pervaded every action.

In spite of the horrors that seem to be at every turning, there are glimpses of hope. Watching Tierney slowly realise just what some of her past encounters truly signified, and fighting for her deep belief in what was right was stirring. Seeing her reassess everything she thought she knew about the poachers and her home world, gave a brief glimpse of what might be…if people were brave enough. Though some of our expectations were cruelly cut down, the turns taken in this story offer hope where it’s most needed.