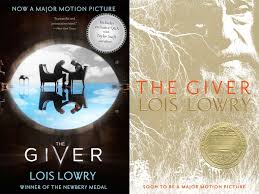 For many this is regarded as the original YA dystopian novel. It’s cropped up on my recommendations time and time again, but I had never heard much about it.
In this world, everything is strictly regulated. It’s all done for people’s safety and well-being, but it’s so safe and constricted. Nobody knows this, because they’re indoctrinated into the lifestyle. From early on they’re trained to be precise in their language use (abstract nouns such as love don’t have any place here); they’re unfailingly polite; they don’t ask questions and every detail of their life is regulated. This way, people can’t make wrong choices. They can’t be upset.
They are also, it seems, not really living.

Jonas is almost twelve when we meet him, and he’s eagerly awaiting the details of his work training. On the day of the ceremony he’s left out. However, this is because those in charge have decreed he should become a Receiver. This is the highest honour that can be bestowed in the community, but nobody really knows what it entails.

When Jonas starts his training it is with a mix of eagerness and worry. He is told his new job will be to receive the memories – not just of the community, but of those that came before, and those from even earlier. He will be granted access to books, and he will – eventually – be able to see the world in colour rather than the black and white sameness that everyone else experiences.

Initially, the training focuses on pleasurable experiences. He is shown the exhilarating memory of sledging down a hill, feeling the sun on his skin and happiness at a birthday party. Soon, however, he is also given less pleasant memories. He sees war, he feels the pain of a broken limb and the loss of death.Jonas can talk to no one about his training, only the person giving him the memories (the man he will replace). In their conversations we are encouraged to consider for ourselves our own thoughts on these topics.

The ending was a curious one. I know this is part of a quartet, though it seems each story focuses on a different character. It’s hard to work out what we’re meant to feel at the end of this. While it was hopeful, there was also a melancholy to it that unsettled me.