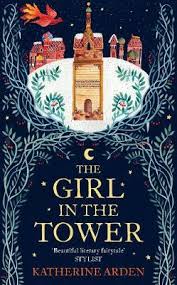 The magical adventure begun in The Bear and the Nightingalecontinues as brave Vasya, now a young woman, is forced to choose between marriage or life in a convent and instead flees her home—but soon finds herself called upon to help defend the city of Moscow when it comes under siege.

After a very slow start (the first part I’m afraid was a slog), we catch up with Vasya and follow her on her reckless journey.

Having run from home Vasya is disguised as a boy and travelling the country. She gets caught up in all manner of political intrigue, but from the moment she reappeared in the story I couldn’t put the book down.

There’s a wonderful blend of political and fairy-tale, and Arden’s focus on the supernatural lends a real charm to the story even when she is focusing on deeply unpleasant elements. There was something magical about the characters Vasya encounters with her willingness to see beyond the confines placed on people by society.

From part two onwards this story zipped along and built to a dramatic climax. I didn’t want it to end.