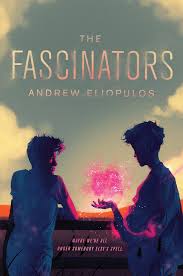 The Fascinators was one of those reads that I’m not quite sure what to make of.

The prologue opens by getting us to see young Liv picked up by a group that we know nothing about and hints at something awful happening before completely switching focus. The story then shifts to a trio made up of Sam, James and Delia. They practise magic and are definitely something of an oddity in their hometown. We don’t know where their magic comes from or why it’s such a big deal to them, and this lack of detail was part of the issue with the book for me.

These characters live in a world where magic is fundamental to the story unfolding for us, yet we are never shown how we come to this position. With the arrival of new guy Denver we can see there’s a shift in the dynamics but it’s unclear just why this comes about.

A key factor in this story is the focus on Sam coming to terms with his feelings for James and how this impacts on their group dynamic. There’s clearly been tension for some time before we encounter the group but we don’t really get to understand this until a lot later on, by which time we’ve probably decided our views on them all and what we want to happen.

In terms of plot, it’s actually quite straightforward – but without really getting a full picture of the world/attitudes to magic it was quite hard to really understand the significance of details until quite late on. Sam was infuriating at times, but the end result was actually quite positive and suggested that his relationship with James could have been held up to closer scrutiny.