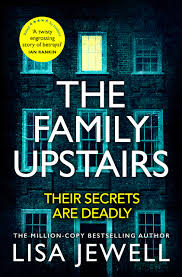 A curious read that was, for the early stages, confusing and – at times – irritating, but also which eventually had me astounded at the manipulative behaviour of the characters within its pages.

The story focuses on two different timeframes, and quite a large cast of characters though we only get detailed viewpoints from a number of them. On her 25th birthday Libby receives a letter that she had been prepared for – a letter from a solicitor representing her real parents. The letter tells her that because nobody else has come forward she now is the owner of a very large house in Chelsea worth millions.

Upon visiting the house, it’s clear to Libby that there’s a story to her past. She is determined to find out what she can…and it’s a story so strange that it’s almost hard to believe it.

Alongside Libby’s story we have the view of Henry, one of those living in this home before things went so horribly wrong. A wealthy family, mother charmed by a manipulative conman and a bizarre set of circumstances that leads to a most puzzling situation. Henry is not the most reliable of narrators, and when he appears in Libby’s present it definitely becomes more tense.

For me the thing that was most off-putting was the switching between the past and present, and the mysterious Lucy whose role didn’t become clear until a lot later on. However, if you don’t mind having to work that little bit harder to piece things together then you’ll probably really get your teeth into this.

It’s a fascinating psychological study, and though there’s plenty of questions left unanswered there’s more than enough here to satisfy most readers.