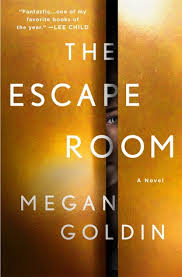 Perhaps there’s a small part of me that wants to intensely dislike one of our main characters, but once we learn what she’s actually done there was a part of me that shook my head in admiration and felt rather pleased for her, even though she’s not someone I found particularly likeable.

The construction of this book was so interesting.

We begin with a prologue that tells us how everything is going to end. A security man in an office building hears what he thinks is a series of gunshots. Nobody else is meant to be in the office, so he immediately calls the police. They don’t take him seriously…until they arrive to find an elevator with four people inside – three of whom are dead – and a lot of blood. Of course we have questions!

The focus then shifts to thirty odd hours previously where the four people found in the lift arrive at this building for what they think is a training exercise…an escape room task to help them bond. It sounds a ridiculous premise for a Friday evening, but as we delve into their moments in the lift and learn about them/their work on Wall Street for a highly successful company, it doesn’t sound quite so unfeasible.

Alongside the account of the time in the lift, which slowly uncovers the animosity between these characters, we have the narrative of another worker in the company – Sarah Hall – who joined them not long before this event. We are shown some of the daily life of such high-profile workers. It is brutal. None of the characters we meet – including Sarah – are particularly likeable. They may not have always been so selfish, but this environment brings out the worst in them. Without batting an eyelid they will spend thousands, because to them it is nothing. Vacuous, greedy and ready to stab someone in the back without hesitation these people are not people we are encouraged to feel sympathy for.

Yet for some on the periphery of this experience, this environment is not about money and selfish desires being fulfilled. Rather, it is an intellectual challenge…but such naivety cannot last in this environment.

As we slowly piece together the reality of the elevator setting and the background to each of these characters I found myself desperately hoping that someone would come out of this looking remotely good. While there is a definite murkiness to this resolution, I found myself feeling it could be justified. And for me that juxtaposition between what we know to be right and what we convince ourselves is acceptable lies at the heart of this fast-paced thriller.