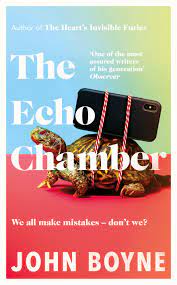 The Echo Chamber is a curious read. It’s being touted as biting satire and a topical exploration of our obsession with social media…I’m not wholly convinced that’s quite what we’ve got, but it’s an entertaining diversion in some areas.

The focus of the book is the Cleverley family. George has been a favourite of the BBC for years, prone to the odd gaffe on air and his wife, Beverley, is a writer of popular romances (though she employs a ghost writer and merely gives the ideas) who has been having an affair with her partner on Strictly. Their three children have led a rather charmed life, and the whole family is obsessed with their social media accounts and profiles. The story (such as it is) focuses on a short period of time in their lives when everything blows up in spectacular fashion, leading them to reflect on their reliance on others’ affirmations.

As I was reading this I couldn’t help but rail at just how unlikeable each of the characters was. Much was made of the role social media had in this family’s trials and tribulations, but they seemed to be doing a very effective job of being rather unlikeable and messing things up in their own. For us to care about the fates of the characters there really has to be something about them we might like/admire. This was lacking, so it meant I read the book not really feeling anything had happened to these characters that they weren’t instrumental in bringing about.

There were some moments of mild amusement, but some of the observations became repetitive and simply telling us over and over again about an issue without offering any alternative doesn’t really seem the point of satire. For too much of the book it felt like Boyne had generated his own echo chamber. The reading of this felt like ordering and drinking an overpriced coffee, where everything was superficially appealing but the reality was full of froth with little substance.

I’m grateful to NetGalley for giving me the opportunity to give my honest thoughts on this prior to publication, but it was not quite the experience I’d hoped for.