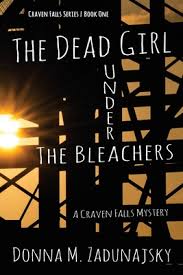 The Dead Girl Under the Bleachers opens with the murder of an unnamed girl. We know this event is taking place late at night, before the weekend, and that whoever kills the girl blames her for something. Then we cut back in time to allow the author to build up to the why and where, and dropping little clues about the who.

I think the first thing to say about this story is it’s ridiculously over the top in content and style. The characters walking round in this book are, to put it mildly, deranged and if you were to experience just one hint of the craziness going on here you’d walk away. By the time we get to the end I was almost laughing at how preposterous this story had become.

Our story focuses on a trio of girls. There’s bitchy Mayor’s daughter, Scarlet, who is a bully used to everyone jumping to do her bidding just because. We have her best friend, Rachel, who doesn’t like her all that much but who recognises that small-town popularity has its advantages. Lastly, there’s loner Laura who used to be friends withRachel but who has kept herself to herself since her brother and father were killed in a crash and her mother has become an abusive drunk.

For reasons that make little sense – like much of this – Scarlet decides that she wants to humiliate Laura and tries to befriend her in an attempt to cause maximum hurt. In the process, Rachel and Laura become friendly again and start to unearth some awful secrets about those around them.

There are so many skeletons tumbling out of closets here that it’s hard to know which way to turn. The casual misogyny and use of traumatic experiences for entertainment seems callous – perhaps it’s meant to mean something, but it comes across as cheap. I find it hard to believe such things would take place without anyone being suspicious, but we do build to some answers and some of the worst things are dealt with.

Thanks to NetGalley for letting me read this prior to publication. If you like Pretty Little Liars then this could be up your street, but it really would be a stretch to say I’d enjoyed it or would recommend it to others.