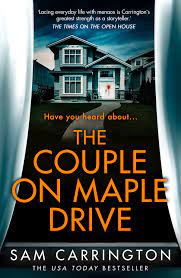 The book opens with a body being carried out of a house on Maple Drive and someone led out in handcuffs. By the end of the book we know the identity of each of these characters, and have been offered the reasons for it.

Isla and Zach are a relatively new couple. They’ve worked together for a while, and after experiencing a violent mugging Isla has been struggling to cope. Zach has moved in to care for her, but as Isla begins to get flashbacks to the night of her attack she starts to wonder whether Zach might know more than he’s letting on. She enlists the help of a group of true-crime enthusiasts and, from this point on, things happen quickly.

What happened is actually signalled fairly early on. I wondered to what extent we were being toyed with, and whether the reality of the situation was more focused on Isla. While there’s something refreshing about things being as they seemed, it felt odd. I felt duped; expecting something clever but then realising it was exactly what it seemed. This is very much more about my expectations than a problem with the book.

The story began, for me, rather slowly. It seemed to take a while to flesh out Isla’s situation and she was a protagonist that it was difficult to warm to. She made dubious decisions and the rapidity with which things escalated was bizarre.

Much of the story hinges on characters that play a peripheral part in events, and things meld together in a way that is quite incredible. It was hard to reconcile the images we’d been given of certain characters with the reality of their actions. Some elements made little sense.

While I had my issues with the book, this was a pretty solid thriller that offers enough to keep you entertained while reading.