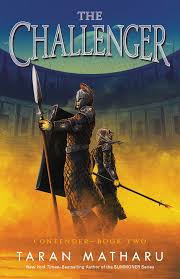 Talk about leaving you hanging! A frustrating (yet fitting) end to a cracking story.

Picking up not long after the events of Book One, Cade learns that he is to act as the representative in a much bigger battle. It’s a threat he is ill-equipped to deal with, so the priority for the group at the start is to find armour.

Unfortunately, while searching for what they need the group are taken by slavers. Cade has to barter for his freedom – resulting in them being forced to participate in the emperor’s gladiatorial games.

What follows is fraught with danger, but wholly believable. Seen from Cade’s perspective we are made to witness a number of awful battles as he strives to complete the tasks put in front of him to secure what he needs to have a chance of success. We get a lot of awful scenes, but Cade’s honest reactions to these mean we never see them as anything other than a very necessary step towards what he needs to do to get home (or be in with a chance to).

There’s hints of romance, which you could see coming a mile off. There’s deepening bonds of friendship and there’s a clear sense that these characters we come to care about are mere pawns in a much bigger game.

I am so grateful to NetGalley for granting me access to this in exchange for my thoughts. Now I need to dig a little and see what the plans for part three are…I have questions that I’m really hoping will be answered!