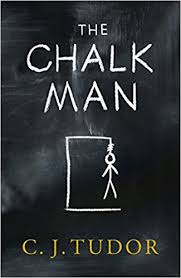 For me, this was an assured debut that I devoured but did not want to end.
Our narrator, Eddie, is in his early-40s and he lives in his childhood home, teaching in his old high school. One day he receives a drawing of a stick man in the post and it sparks memories of a childhood game he and his friends used to play.

Told in two different time-frames, this really is a compelling read. We jump from the present (2016) to thirty years earlier when Eddie and his friends are on the cusp of adolescence. It’s a very different time, and one which will only be familiar to some readers from Stephen King’s ‘The Body’ and the Netflix show ‘Stranger Things’. Eddie’s group of friends share a lot, but they all have their secrets.

The key secret that the novel focuses on is the murder and dismemberment of a teenage girl in 1986. The group are involved as they find the body having been led there by chalk drawings. We’re never certain if they know more than that, and what quickly becomes apparent is that in this town there’s a lot of people with things they’d rather others didn’t know.

I particularly liked the way the shifting perspective meant we could never be certain what revelations were relevant and how, and the nod to King is evident in so many ways (not least with the teacher being called Halloran). The style of writing was one I found hard to put down. It was very easy to picture this as a film, and seeing the viewpoint of both child and adult narrator added a complexity to this that I found hard to resist.

All in all, a wonderful read for the start of the new year and one I’d highly recommend.