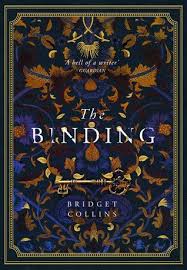 The Binding will be one of those divisive books that will have both fans and haters alike, but whichever camp you fall into I think there’ll be similar comments made about it.

For me this was the story of Emmett Farmer, a young man drawn to books but reluctant to take on the apprenticeship he’s offered for reasons he can’t explain. He comes to learn about himself and how he might challenge the expectations of his time.

When I requested this from NetGalley it was because of the lure of a story about books. In this world books are currency, used by fraudulent men to bind people to them. Books in this form are not stories – works of fiction are sneered at here as being less worthy – but they are used to draw memories from people who desire to forget things. Sometimes this is an unpleasant memory, but sometimes these bindings are used as a form of covering abuse or controlling others.

Intriguing though this was, we don’t focus on the books as much as I expected.
There’s no denying the fact that the first part of the story feels slow as you read. It drifts and it’s not clear why certain events are happening as they do, and the recurring allusions to secrets to be told did get a little wearing. However, as we started to uncover some of these details I became more invested in the story. Unfortunately I can see many readers being bored by the midway point where things really started to move forward, and simply not bothering to read on. That would be a shame.

As we come to understand Emmett’s actions and unearth some of the details that have led him to this point I couldn’t help but feel the story had shifted into a place that wasn’t expected.

Thank you to NetGalley for the opportunity to read this prior to publication.