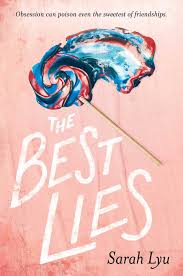 Sometimes the hardest person to tell the truth to is yourself. In this tale of obsessive destructive friendship, Remy learns this lesson the hard way.

When we first meet Remy she’s struggling to feel she has a place in her family. Her parents argue all the time, and are clearly unhappy in their relationship but neither wants to break the mould and actually separate. Her older brother, Christian, is academically talented and part of the popular crowd at school. Remy has talked herself into believing there’s no point trying to challenge the way she’s seen at home. She is living in a fairly toxic environment, but also seems unwilling to take any steps to challenge this.

Into this potentially damaging relationship comes Elise. Something of a mysterious character she has spark and takes Remy under her wing. There’s only ever talk of friendship, but there’s a clear sense of dependency between the two girls. They start to ostracise other members of their peer group, and the pranks Elise plays quickly escalate in seriousness.

The book focuses on the fact that Remy is being asked to talk to the police. Her boyfriend, Jack, has been shot and it appears that her best friend, Elise, was the one who did it. Someone knows more than they’re letting on, and we – just like the police – want to know exactly what.

A lot of the details about the friendship between Elise and Remy are told in flashbacks. This is necessary, but it does mean we always feel like we’re playing catch-up. It takes time to show their dependency on each other and to plant suspicion as to what might have brought about this situation.

As we come to see more of the events in their friendship, we can see that not everything is straightforward. Each is hiding things, and the way they interact seems like it’s only a matter of time before we get something big.

Though not quite what I was expecting, this was an intriguing read. So often I wanted to shake Remy and it was evident this scenario need not have happened. However, as an exploration of friendship and the damage we can do – to ourselves and others – it was an unusual take on things.