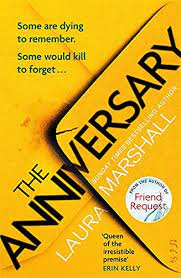 On 15th June 1994 the small town of Hartstead was shocked when caretaker Travis Green went on a rampage, shooting eleven people. The victims appeared to be indiscriminate, and nobody has ever been able to understand fully why this awful thing happened. Cassie Colman was only four when her father – the last victim – was murdered in front of his wife and daughter.

It is now coming up to the twenty-fifth anniversary of the shooting. As expected, people are keen to revisit the town and to learn how these events have impacted on the lives of those left behind. For Cassie, now a young mum herself and struggling to cope with her mother’s early dementia, this is an unwelcome intrusion. Though she is, herself curious about exactly what happened she has reconciled herself to not getting answers.

When a local journalist starts talking to Cassie, she can’t help but be curious. It seems there are some anomalies in the accounts given of that day, and Cassie finds herself drawn into examining the actions of those she has always known in a different light.

This was an interesting idea. We are given some insight into the way in which such events are portrayed in the media and the way people are expected to behave. We get the stories from the past which help us to draw together a fuller picture of the events of that day. And, shockingly, we learn that sometimes things are not what they seem…

The main story was good, and I really found myself enjoying the way the narrative was structured. As we followed Cassie come to her shocking discovery, it felt so much more nuanced than I was expecting and turned things in a direction that took me rather by surprise.

Thanks to NetGalley for allowing me the opportunity to read this before publication in exchange for my honest thoughts.