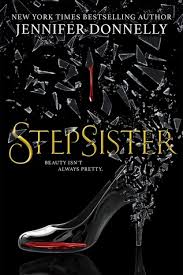 When I first started Stepsister I was hesitant, wondering quite where the story would go.

We begin with a well-known scenario, that of the prince trying to find the owner of the glass slipper. We watch a mother desperate to secure safety for her children force not just one but two of her daughters to mutilate themselves in an attempt to win the prince’s hand. Each time, their deception is uncovered. Yet in this story we see that the two sisters are unwilling partners in this deception. They succumb to their mother’s wishes because it’s what is expected of them. As in the fairytale, our forgotten put-upon stepsister gets her prince and leaves.
In this story, however, we remain with those left behind.

The characters of Tavi and Isabelle do not fit the conventional view of a woman. Tavi is obsessed with knowledge, and desires nothing more than to discover something. Isabelle has rather lost her way, knowing only that she wants something that society deems she cannot have. Bound by the expectations of others she subjugates her wishes in an attempt to do the right thing by her family.

I found myself amazed by the very sympathetic portrayal given to characters we’re encouraged to dislike. This feeling only grew as the story unravelled.
Though I was perplexed by this element initially, we have the characters of Fate and Chance playing their own game. Meddling with the lives of Isabelle and her family, each wants to leave their mark.

Without giving anything away, this was a story that showed us a girl full of character slowly learning to love herself and resolve to have confidence in her own desires. Dressed up as a fairytale retelling this was a dark feminist call-to-arms that I would strongly recommend.

A huge thank you to NetGalley for allowing me to read this prior to publication in exchange for my honest thoughts. I’m still gushing!