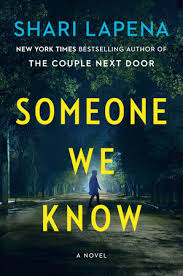 Raleigh is a fairly typical 16 year old, but when his mum reads a text sent by one of his friends she learns something pretty unpleasant about him. He’s broken into local neighbourhood homes. He confesses pretty quickly, but not to everything he was doing in the houses or the number of houses he went into.

His mum is, understandably, horrified and seeks the advice of a lawyer. His advice is to sit tight and admit to nothing. Raleigh will not be guilty of anything if nobody knows a crime has been committed. His mother is horrified by this advice and writes an anonymous letter to each of the victims.

Unfortunately, one of the homes Raleigh broke into belongs to the Pierces. Amanda was reported missing by her husband, and when her beaten body is fished out of a local lake we know there is more to this.

On one hand there’s the family trying to protect their son, and then there’s the mystery of the dead woman and who had incentive to kill her. Alongside this is new to the neighbourhood Carmine, desperate to solve the mystery of who broke into her home.

The main feeling I had as I read this was a kind of grim fascination. So many characters were hiding things, and there were a lot of secrets unearthed implicating any number of people. Nobody in their right mind would want to live in this neighbourhood!

Eventually, the net draws tighter and the truth is squeezed out. It wasn’t wholly unexpected but it certainly made me want to draw the curtains, lock the doors and keep myself well and truly isolated.