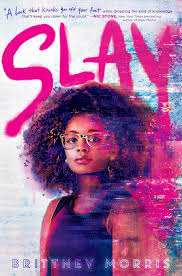 Thank you NetGalley for giving me the opportunity to read something way out of my comfort zone, which I can see having a pretty big impact when it’s released towards the end of September 2019.

Kiera is an honours student and seems pretty certain where things are going. She and her boyfriend have plans for college and the future. But she has a secret that she doesn’t feel comfortable sharing. She has designed and co-created a digital world where members can form a community…a game called SLAY.

Fed up with the abuse she suffered playing other on-line games, Kiera has taught herself what’s needed to create a whole new world. In this world, black game players don’t have to worry about online trolling and racist abuse. The moves they can use are part of black culture, and Kiera sees this as her safe space. Somewhere she can explore who she is, without being worried she is being judged.

Though the game seems to have come from a well-intentioned place, events somewhat take over and it’s suggested that Kiera has been a little naive. A young boy who plays her game is killed in real life and at the heart of his killing is an in-game dispute. Kiera feels responsible, and so many voices start to point the finger.

When someone hiding behind the handle ‘DRED’ finds their way into the game, Kiera has to come up with something special to show her intent. An interesting way to explore race and attitudes to race. I didn’t really get all the gaming talk, but the issues it examined were definitely compelling.

There’s no easy answers to some of the questions posed in the book, but it serves as another attempt to initiate discussion and certainly a different way into it.