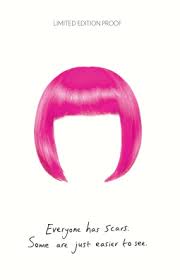 It’s not often I thank people for reducing me to tears. In this case, it’s thoroughly deserved. So, thank you to Erin Stewart via NetGalley for making me sniffle in public in a way I wasn’t expecting to.

I went into this story expecting it to be a very earnest read about how we treat survivors, expecting to find it all too much. What I got was a brutally honest exploration coming-of-age story that just happened to have a burns survivor as its main character.

Ava has not had it easy. Caught in a house fire a year before the book opens, she has had countless surgeries and has endured numerous grafts to help her recovery. She can just about bear to look in the mirror, but misses the fact that all anyone sees when they look at her is her scars. Having lost her parents and cousin in the fire, Ava now lives with her aunt and uncle. All of them are struggling to adjust to their new reality.

There’s a line quite late on in the book that is used on the cover. It reminds us that everyone has scars, some are just easier to see and that really sums up the message of this book for me. As teenagers the characters in this book are finding out who they are, feeling their way in life and trying to work out how to move on from their own individual shortcomings. Just some of them have more obvious barriers to this process.

I’m not a particular fan of musicals but the part these play in Ava’s development make perfect sense. It’s only a small thing, but having the courage to get up on stage and reclaim something she loved so much shows how much she’s moved on during the story.

The friendships in the book are crucial to its success. Ava and Ashad develop a bond that hints at more, but he sees her for who she is. Her friendship with fellow burns survivor Piper isn’t always positive, but its honesty was really encouraging. On occasion I was concerned it was rather mentally and emotionally unhealthy, but I don’t know how much of this was down to the situation these characters were in. There were plenty of ups and downs in their friendship, but they are good together.