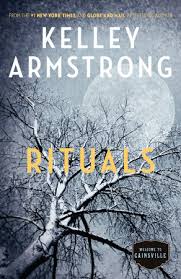 A fitting finale to the series, which merges crime and the paranormal, but it keeps us hanging on right until the end to get some of our answers.

With Ricky stepping aside at the end of the previous book, there is a part of Liv that misses him though she remains focused on the work she has to do for Gabe. These two edge round each other, seeming destined to be together but reluctant to take that step. Getting insight into both characters’ views though, it is a rather inevitable moment that we’re waiting for.

This time round the trio realise they’re dealing with a darkness much bigger than that they feared. When Gabe’s mum reappears we know there’s something odd going on. So many characters seem to have made deals that bind them to another, and there is a clear sense that we are waiting to see how all these moments link.

There’s more fae stuff, a lot of relationship stuff, a few dangerous moments…and, just when it all starts to seem too much, a rather sneaky resolution. It wasn’t quite what I was hoping for, but it fits with the way the characters have approached everything through the series.