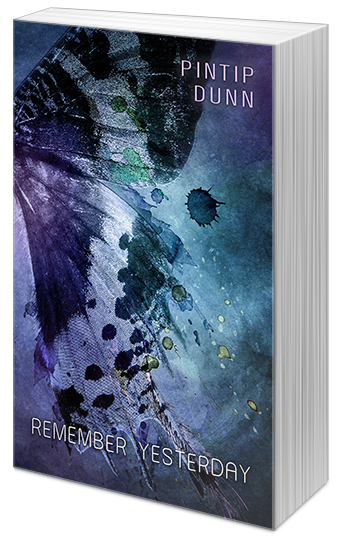 Having loved NYT best-selling novel ‘Forget Tomorrow’ – the first in the series – I was so excited to be asked to participate in the blog tour for Pintip Dunn’s ‘Remember Yesterday’, so thank you to publishers Entangled Teen and NetGalley for the advance copy in exchange for my honest thoughts.

For anyone who isn’t familiar with the series, I strongly advise that you read ‘Forget Tomorrow’ first in order to understand the world in which this story is set. ‘Forget Tomorrow’ ends with Callie killing herself in an attempt to prevent what she has been told is her future. When I reached the end of ‘Forget Tomorrow’ I admit to feeling a little cheated; I wanted to know what happened next. You can only imagine my relief when I received my copy of ‘Remember Yesterday’, thinking I was finally going to get some answers.

There are answers, of sorts, though they are not immediately obvious.

The story picks up ten years later, with Jessa now sixteen and trying to adjust to life without her sister. As the most valuable citizen in Eden City Jessa is only too aware of what could happen if she allows TechRA to study her psychic abilities, so she spends her time sabotaging the experiments undertaken in the labs. In her attempt to fulfil her future, by doing what she can to prevent the creation of future memory, Jessa becomes reliant on arrogant scientist Tanner – the boy from school that she loathes.

Although events twist and turn at some rate, it is only as I got some way into the book that I could start to see just how flawlessly this was plotted. It was interesting to see things from a perspective other than the one I was expecting, and I really felt that things were drawn together well that had been somewhat left hanging in the first part of the series. There also seems to be the potential for a third in the series…