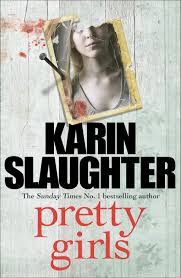 Being a little squeamish I was unsure how I’d cope with the graphic violence talked about here. The subject matter was never going to be fun…and I wondered why I’d picked this up. However, I’m pleased I did.

There’s a fine line between graphic violence for illustrating an aspect of character/plot and titillation. Maybe some of the details being absent would have made very little difference, but I certainly didn’t feel we were meant to find anything appealing about what was put in front of us.

The story is one spanning a number of years. It focuses on the disappearance of Julia Correll and the effects on her family. We see, years later, another young girl disappear and there seem to be similarities in the cases. Julia’s sister, Claire, is a key character -and we see her life unravel in front of us as she realises the extent to which she has been manipulated by someone close to her.

Few could imagine being in the kind of scenario described here. The developing relationship between Claire and her surviving sister was a positive aspect of a rather grim story. Not one to enjoy, but I certainly admired the construction of this.