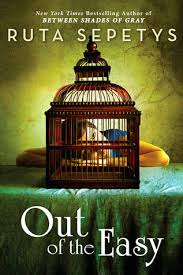 Immersed in 1950s New Orleans, this was a great read.

Seventeen year old Josie Moraine is the daughter of a prostitute. For years she’s looked after herself, and is desperate to make something of her life.

Helped by Willie, the local brothel madam her mother works for, and a number of other characters Josie tries to break out of the chaos brought to her life by her mother.

There was a warmth to this that really shone through. Josie was a determined character who was dealt a pretty tough time, yet she tried her best to rise above it. Her mother was not a caricature villain, but her behaviour was appalling.
The main thrust of the story is Josie trying to do the right thing by the people she interacts with, while learning about herself. She dreams of a better life, and yet at every opportunity this seems to elude her.

While the ending might not be quite the one she planned for herself, it brought things full circle and really showed the relationships she invested in to be positive and beneficial.

Sepetys is fast becoming a go-to author for me.