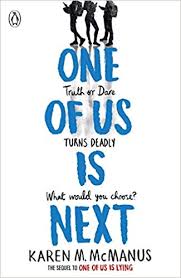 Much as I’d enjoyed One of Is is Lying I was a little unsure of the idea of a sequel. What else was there to tell us? When the book opened with an introduction to our new characters I started to think this was just going to be a derivative of its predecessor, and prepared to be less than keen. It’s testimony to McManus’s writing skill that what I feared would be a hurdle didn’t end up an issue at all.

The story opens by introducing our key characters: Maeve, her friend Knox and Phoebe. While we got to know a little more about our cast this time round, I liked the fact that McManus also filled us in on what had happened to the original Bayview Four and shown us some of the effects of Simon’s scheme.

Very early on we get told of a new game…Truth or Dare. For a school so rocked by the events described in book one I was surprised at how easily this caught the imagination. Our first date is a seemingly innocuous prank involving adding something extra to the roof decoration of a local diner. Relatively good-humoured, not seeming to hurt anyone and offering a chance for people to gossip. When our next ‘victim’, Phoebe, refuses to play it’s like Simon has returned…scurrilous gossip starts to do the rounds and people desperate to keep their secrets take on the dare. The dares become increasingly humiliating and, all too soon, we’re left with a dead student.

The game served as a handy backdrop to show a little more of the social background of Bayview. It was the mystery of who was behind it and their motives for starting things in the first place that formed the real focus…and this is where Maeve came into her own.

While the scenario itself might, ultimately, be more than implausible I was keen to read on and find out the truth of what was going on. Unearthing the secrets and establishing the links between odd snippets of information was definitely the high point of the novel for me. It quickly built up to a suspenseful sequence of events with a rather explosive conclusion, and I was left with the feeling that we haven’t heard the last of some of these characters.