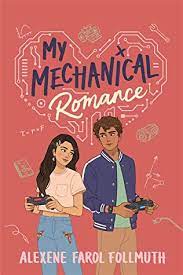 My Mechanical Romance is a cute romance, immersing us in the world of robotics…and having been an avid watcher of Robot Wars when I was younger I could understand the appeal (even if the creation of these things was not in my sphere of interest).

Bel is reluctant to think too deeply about the future. She is a capable student but hasn’t considered her future, isn’t sure what she wants to do at college and hasn’t even thought about how to make herself an interesting potential student. Teo, on the other hand, has his future planned with precision. He’s single-minded in his pursuit of academic excellence and is scarily focused on his extra-curricular activities being tailored to give him maximum advantage. Each has their reasons for behaving like this, both of which are revealed as we read, and I couldn’t help but feel sorry for any young adult caught in this kind of academic pressure-cooker.

The focus on academia sounds heavy, but it is very much in the background. Our key interest is Bel’s involvement in the Robotic club and their preparations for National competition. It’s intense! There’s a couple of moments that had me rolling my eyes in frustration – the well-timed illness and the annoying sexist opponents- but these do offer something to the narrative.

I enjoyed the developing relationship between Teo and Bel, and it was certainly an interesting read to look at women in STEM and the institutionalised barriers that may impact on those wanting to get involved/feeling they can’t get involved.