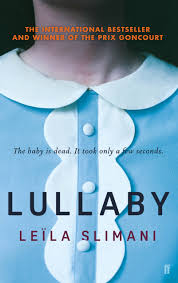 I’ve had Lullaby on my bookcase for ages, but never really felt I could face reading it because of the subject. After reading the opening, which is pretty graphic, describing the violent way in which the nanny has attacked her two young charges I felt vindicated in not having picked it up earlier. What on earth would possess someone paid to care for children to attack them?

Having opened in this way it was inevitable that time would then have to be spent plotting the lead to this event. We get to see Myriam and Paul adjusting to life as parents, and Myriam’s resentment of her husband which leads to the decision to find a nanny. I felt the attitude of these parents was quite disturbing. They wanted cheap childcare but felt a sense of superiority over the women they were interviewing.

When they meet Louise she’s given glowing referrals, immediately bonds with the children and – before we know it – she’s hired. There’s then a slow creeping sense of unease as we watch Louise insidiously work her way into the very heart of the family. She cleans, cooks, keeps the children entertained and seems a regular Mary Poppins.

Having seen how this turns out, we’re acutely conscious of any signs of a problem. Initially it seemed as if Louise might end up having an affair with Paul, but the reality was much more scary. The family need her, but not as much as Louise seems to need them. Her declining mental health was hinted at, but each character was exhibiting signs that they could cause a problem.

As I neared the end of the book I was struck by the ambiguity of the situation. There’s no evident resolution, and yet this felt more appropriate than tying things up neatly. I feel this will sit with me for some time.