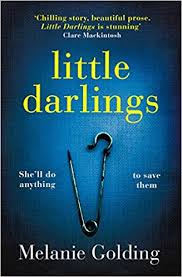 Little Darlings is a curious read, and I don’t know whether to describe it as a psychological thriller or a paranormal mystery. It’s ambiguity leaves the reader rather nonplussed at the end, but it’s a read that forces you to keep going to try and puzzle it out.

Lauren Tranter has just given birth to twins. Sleep deprived, without a support network and full of doubt, she is struggling. While in hospital she thinks she hears a woman singing to twins. However, her children are the only twins in the hospital. Another night she believes the same woman has tried to abduct her twins. She locks herself in a hospital toilet and calls the police. There’s no evidence of anyone else having been in the hospital.

Eventually let home Lauren retreats into herself. She stays at home, full of doubt about her capabilities. Her husband is beyond rubbish – insisting on catching up on sleep during the day as the twins have kept him awake, and begrudging Lauren asking for a drink – and complains that she’s not taking control of stuff. Concerned for her welfare, or sulking because he actually isn’t the most important thing in her life? We’re not sure.

After a week or so, Lauren decides to try and get out for a walk. Things seem to be going well. Then she sits at a bench, falls asleep and wakes to find her babies missing. After a frantic police hunt the twins are found, by a woman who seems to have been having a relationship with Lauren’s husband, and Lauren is convinced her twins have been exchanged.

Interspersed with this narrative we have Harper, a member of the police who goes above and beyond to work out what’s happening. Her approach was unlikely, and yet it offers credence to the paranormal element of this story.

By the end there were signs that there was nothing mysterious about this at all. Lauren simply had a deeply immature and unpleasant husband, and she was mentally ill. The resolution of the narrative didn’t offer much hope, and left me feeling rather short-changed.

Thanks to NetGalley for letting me read this and offer my thoughts in exchange for an ARC.