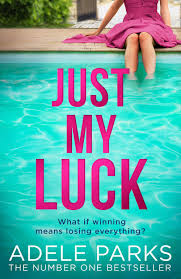 Reading stories in the press about huge lottery wins always concerns me. I know it makes good news, but you never hear of someone winning a life-changing amount of money and enjoying it. You only hear of those who squander the winnings or how people become a target for all manner of scams. Though we know this, and how low the chances of winning actually are, there’s probably a good number of people who think about what they’d do if they had such a win.

In Just My Luck we follow a regular couple who suddenly find themselves nearly £18 million better off. Lexi is fairly cautious, wanting to invest wisely and use the money to make a difference. Her big indulgence is to buy some Teapigs tea! Her husband, Jake, is the ultimate stereotype. His first act – even before they have the money – is to buy a top Ferrari and to buy his way out of whatever comes up. It’s not hard to take quite a dislike to him, and as the story progresses he was increasingly infuriating.

One of the first issues this seemingly normal couple has is the insistence from some friends that they were a syndicate and, as such, should be sharing the money. From this point on we see the money drives a wedge between the family.

Most of the family has secrets, some of which have more of an impact than others. The story took something of a detour with the character of Toma, but the links are outlined eventually. Things got awfully dark, and a substantial part of this book had me wondering whether people really could be so awful in reality. Even the characters we were meant to root for were secretive, and some of them were so horrendous that it made me want to ban the lottery forever.

Thanks to NetGalley for granting me access to this before publication, and I’d definitely recommend this read – even as a salutary lesson to readers.