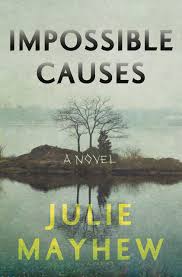 This is a tricky one to review, and it is certainly a book that was difficult to really get into for some time. However, by the end I was gripped and can certainly see the parallels with something like The Crucible.

Our story takes place on the remote island of Lark. We focus on the narration by Leah, a teacher on the island, who is privy to many of the secrets of the island but who seems rather detached from everything. This sense of ‘otherness’ does become important later on, as it explains why Leah acts as she does.

The island of Lark is cut off from the mainland, physically unreachable for six months of the year. So it is of great interest when an outsider, Ben Hailey, comes to the island to teach.

He – and, as a result, we – comes to learn of the superstitions regarding what are referred to as the Eldest Girls. There are three girls aged 16 who, now, are given what seems like carte blanche to act as they like. There is talk of witchcraft and odd behaviour, but it is what has always been and people turn a blind eye. The inclusion of new girl Viola seems to act as a catalyst for the behaviour to escalate.
Before too long we get told of a dead body and people start to talk about what is happening. As things become more personal for Leah, the ‘new arrivals’ force the villagers to confront what is happening under their eyes.

Initially this seemed to be going in one direction and it was a little hard to follow. Details were vague, but as we learn the truth of Lark it seems there is a reason for this vagueness. By the end, when the true horror of Lark’s dark secret was revealed, I really wasn’t sure what to make of it. Chilling, and definitely worth a look. Thanks to NetGalley for allowing me the opportunity to read this prior to its scheduled November publication.